Bible verse of the day

He keepeth the paths of judgment, and preserveth the way of his saints.
Proverbs 2:8

by Bill Bright
Who, in your opinion, is the most outstanding personality of all time? The greatest leader? The greatest teacher?
Who has done the most good for mankind and lived the most holy life of anyone who has ever lived?
Visit any part of the world today, and talk to men of any religion. No matter how committed to their particular religion they may be, if they know anything of the facts, they will have to knowledge that there has never been a man like Jesus of Nazareth. He is the unique personality of all time.
Jesus changed the course of history. Even the date on your coming newspaper gives witness to the fact that Jesus of Nazareth lived on earth nearly 2,000 years ago. 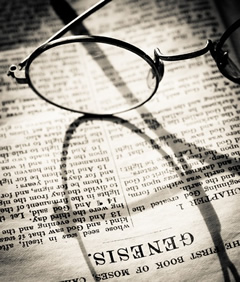 Hundreds of years before Jesus’ birth, Scripture recorded the words of the great prophets of Israel foretelling His coming. The Old Testament, written by many individuals over a period of 500 years, contains more than 300 prophecies detailing His coming, all of which came true exactly as predicted during Jesus’ life, death, and resurrection.
The life Jesus led, the miracles He performed, the words He spoke, His death on the cross, His resurrection, His ascent to heaven–these all point to the fact that He was not merely man, but more than man. Jesus claimed, “I and My Father are One” John 10:30, New King James Version), “He who has seen Me has seen the Father” (John 14:9, NKJV) and “No one comes to the Father except through Me” (John 14:6, JKJV).

Trace the life and influence of Jesus Christ, and you will observe that His message always effects great change in the lives of men and nations. Wherever His message has gone, the sacredness of marriage, women’s rights and suffrage have been acknowledged; institutions of higher learning have been established, child labor laws have been enacted; slavery has been abolished and a multitude of other changes have been made for the good of mankind.

Lew Wallace, a famous general and literary genius, was an avowed atheist. For two years, Mr. Wallace studied in the leading libraries of Europe and America, seeking information to write a book that would forever destroy Christianity. While writing the second chapter of his book, he suddenly found himself on his knees crying out to Jesus, ‘My Lord and my God.”
Because of solid, irrefutable evidence, he could no longer deny that Jesus Christ was the Son of God. Later Lew Wallace wrote Ben Hur, one of the greatest novels ever written concerning the time of Christ
Similarly, C.S. Lewis, professor at Oxford University, was an agnostic who denied the deity of Christ for years. But he, too, in intellectual honesty submitted to Jesus as his God and Savior after studying the overwhelming evidence for His deity.

In his famous book Mere Christianity Lewis makes this statement:
“A man who was merely a man and said the sort of things Jesus said would not be a great moral teacher. He would either be a lunatic-on the level with the man who says he is a poached egg -or else he would be the devil of hell. You must take your choice. Either this was, and is, the Son of God: or else a madman or something worse. You can shut Him up for a fool. or you can fall at His feel and call Him Lord and God. But let us not come with any patronizing nonsense about His being a great human teacher. He has not left that open to us.”
Who is Jesus of Nazareth to you? Your life on this earth and for all eternity is affected by your answer to this question.
Take Buddha out of Buddhism, Mohammed out of Islam and, in like manner, the founder of various other religions out of their religions, and little would change. But take Jesus Christ out of Christianity, and there would be nothing left, for Christianity is not a philosophy or ethic but a personal relationship with a living, risen Savior.

No other religion claims that its founder has been raised from the dead; Christianity is unique in this regard. Any argument for its validity stands or falls on the proof of the resurrection of Jesus of Nazareth Many great scholars have believed, and do believe, in His resurrection. After examining the evidence for the resurrection given by the gospel writers, the late Simon Greenleaf, an authority in jurisprudence at Harvard Law School, concluded, “It was therefore impossible that they could have persisted in affirming the truths they have narrated, had not Jesus actually risen from the dead, and had they not known this fact as certainly as they knew any other fact.”
John Singleton Copely, recognized as one of the greatest legal minds in British history, comments, “I know pretty well what evidence is; and I tell you, such evidence as that for the resurrection has never broken down yet.”
I have yet to meet a man who has honestly considered the overwhelming evidence concerning Jesus of Nazareth, who does not admit that He is the Son of God. While some do not believe, they are honest in confessing, “I have not taken the time to read the Bible or consider the historical facts concerning Jesus.”

THE VISIBLE EXPRESSION OF THE INVISIBLE GOD

Consider these passages concerning Jesus, taken from the Bible: “Christ is the exact likeness of the unseen God. He existed before God made anything at all, and, in fact, Christ Himself is the Creator who made everything in heaven and earth…..(Colossians 1:15,16, Living Bible).
“God has told us His secret reason for sending Christ, a plan He decided on in mercy long ago; And this was His purpose: that when the time is ripe He will gather us all together from wherever we are–in heaven or on earth–to be with Him in Christ forever” (Ephesians 1:9,10, LB).

Because of Jesus’resurrection, His followers do not merely comply with the ethical code of a dead founder, but rather can have vital contact with a living Lord. Jesus Christ lives today and anxiously waits to work in the lives of those who will trust and obey Him. Blaise Pascal, a French physicist and philosopher, spoke of man’s need for Jesus when he said, “There is a God-shaped vacuum in the heart of every man, which only God can fill through His Son, Jesus Christ.”
Would you like to know Jesus Christ personally? You can! As presumptuous as it may sound, Jesus is so eager to establish a personal, loving relationship with you that He has already made all the arrangements. The major barrier that prevents us from enjoying this relationship is ignorance of who Jesus is and what He has done for us.